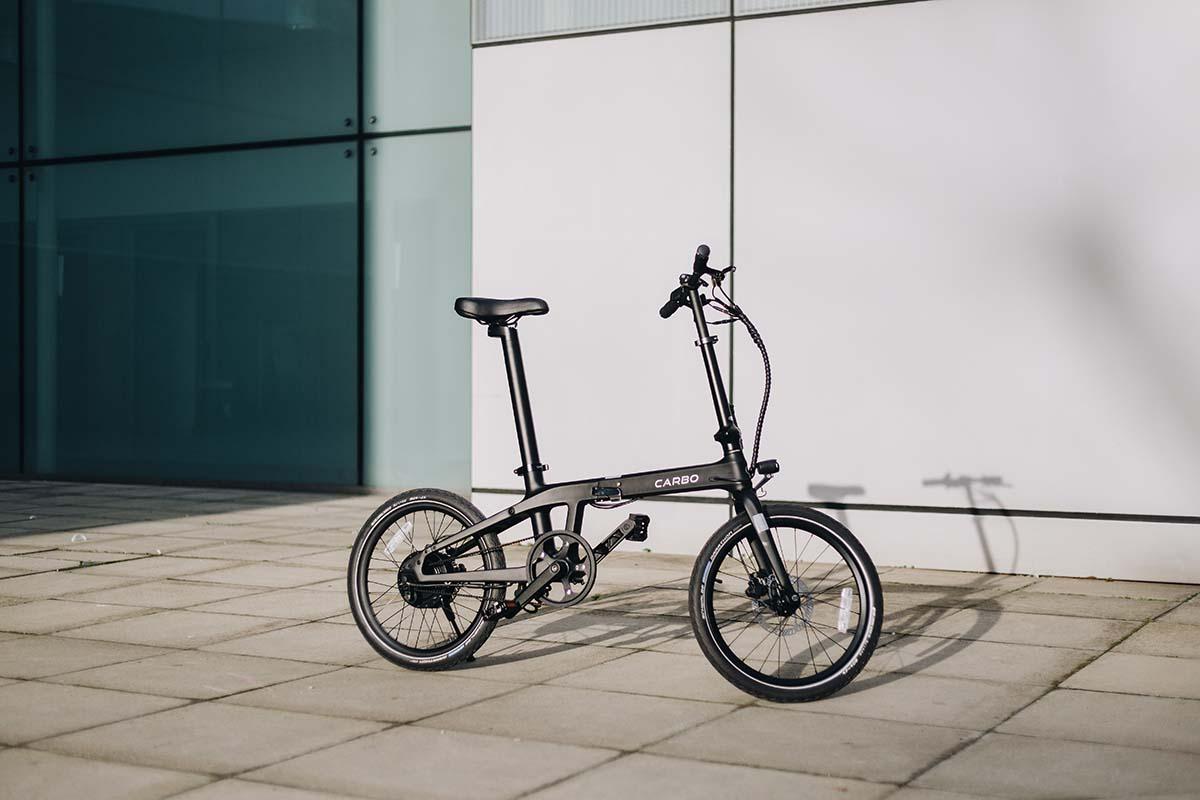 Your electric folding bike shopping list might look something like this. One, the bike must offer a decent riding range when using electric assistance - enough to nip to and from the office, maybe. Two, it should fold to a compact size - small enough for a pokey cupboard or under a cluttered desk. Three, it will be light enough to carry up stairs, lift onto a train or into a car boot or campervan. Enter then, a trio of carbon-framed electric folding bikes from CARBO, a team of electric and cycling enthusiasts who launched via a successful Indiegogo crowdfund in 2018. Velorution is delighted to be able to bring you both the Carbo Model X and Carbo Model S folding e-bikes and thought a closer look at the bikes was in order. Read on...

Diving straight in with the electric system Carbo has selected for their bikes. In a sentence, you're looking at an e-bike with a Bafang motor in the rear wheel, paired with a Samsung battery located in the bike's seatpost. The Bafang motor has a power rating of 250 watts and a torque output of 45 newton meters. To deliver the correct amount of power from the motor, Carbo has fitted every bike with a torque and pedal assist sensor - a complicated way of saying that the system recognises how hard you're pedalling and adapts the level of assistance to match. For more on this topic, our Electric bike motors explained article might be worth a look.

And what of the e-bike's battery? Carbo has carefully inserted a lithium-ion Samsung battery in the bike's seatpost which offers enough juice to the motor for 20-40 miles riding. And because each Carbo is extremely light (more on this later) if you do run out of battery the bike shouldn't feel like a drag to ride. Included with every bike is standard 2amp charger. Connect it to the charging point under the nose of the bike's saddle and it'll be charged from flat in as little as 4 hours. That's not to say you must charge the battery on the bike - just slide the battery and seatpost out to charge it at a more convenient electric outlet.

A display unit on the bike's handlebar displays relevant riding information but also allows the rider to cycle through five riding modes. Assistance off, ECO, Tour, Sport and Turbo, plus there’s a walk mode too, ideal for wheeling the bike through a train station welcome hall, say. Carbo has cunningly added a standard USB charging port under the rear of the saddle, just the ticket if you're desperately scrolling through LinkedIn whilst waiting for a train and your smartphone battery is verging on empty.

And now, Carbo's fold, a simple process that should take all of 30 seconds. Simply push the bike's seatpost down, fold the handlebar and pull the latch on the mainframe and it's done. Once folded the bike's dimension is 80cm high, 60cm in length and 33cm in width - hopefully, that's compact enough for your cupboard of doom or narrow enough for a hallway. We'd argue that it was it plenty small enough to fit in the boot of the latest Volkswagen Golf with room to spare, or popped in the Cross Country train luggage compartment.

For reference, we've listed the folded dimensions of some other popular folding electric bikes below.

The third and final feather in Carbo's cap is its carbon frame construction. Aerospatial grade carbon fibre from Japan is manufactured using the latest bonding techniques to form an ultra-light, yet solid frame. Light enough in fact that the 13.3kg Model X (single-speed belt drive) fights for the title of the world's lightest folding electric bike. The Model S (9-speed derailleur) nudges the scales just a tad further at 15.3kg.

We've listed the total weight of some other popular folding electric bikes below.

It would be remiss of us not to draw your attention to some other standout points of each Carbo bike. Sold in a single size to fit riders from 4'10" to 6'5", Carbo has designed their frames with a very low standover height, making it easy for riders of any height to pop in and out of the saddle easily. And speaking of comfort, with a flick and a flourish of a quick-release lever, it's a straightforward task to adjust the seatpost and handlebar to meet your riding requirements. The bike's 20" wheels are shod with wide Schwalbe tyres which include puncture protection and reflective outer casings ideal for riding in town day and night. Speaking of which there's an integrated front light on each bike, powered by the on-board battery. Meanwhile, disc brakes, with standard 160mm rotors, help bring the bike to a stop quickly and safely.