A closer look at the ARCC Intelligent Drive Pod 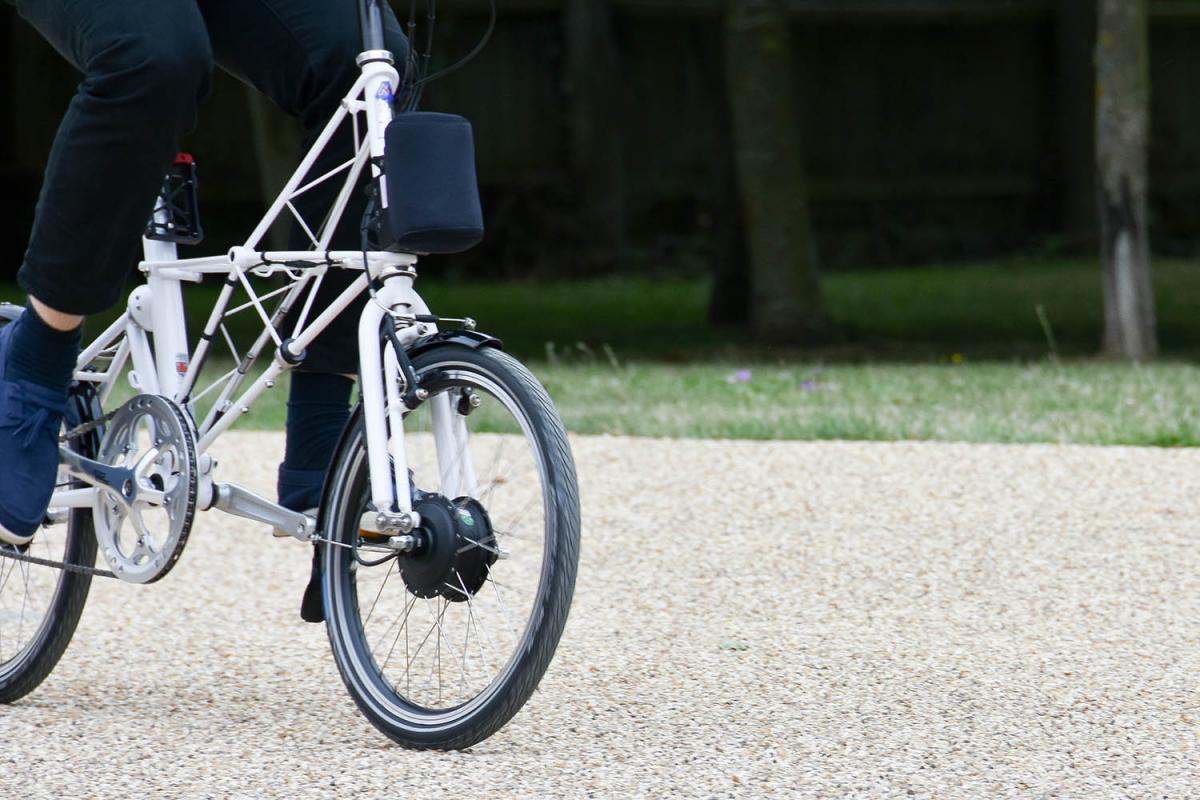 It was back in 2016 that we first threw a leg over a bike powered by the ARCC e-bike system. Although only four years ago, electric bikes then were something of a novelty, an after-thought in a two-wheeled world and perhaps something easily looked over. Today, it's a very different story and many new (and existing) riders are experiencing the power of electric. ARCC has since revamped their e-bike system, the Intelligent Drive Pod to give its full name and we thought it was high time we took a look at it in more detail.

What is the ‘ARCC Intelligent Drive Pod?

The ARCC Intelligent Drive Pod is a highly innovative e-bike retrofit kit, designed and built in house by ARCC Bikes. The system weighs in at a paltry 3.9kg and is formed of a front-wheel motor, powered by a battery mounted to the headtube of the bike. Fitted at their headquarters by ARCC’s experts, the system is currently available for ARCC Bike’s own range of town bikes, the Abington and Rosemont, as well as for the Moulton TSR and Brompton (it is also compatible with Brompton bags).

In the five years since its debut, the system has been consistently refined and its latest iteration, the Gen II, builds on the highly successful Gen I with a sleeker design, alongside several new technological additions.

The Intelligent drive pod's manufacturing process is meticulous and relies on sophisticated equipment, including CNC machining and 3D printing. Most of the components are fabricated from solid billets of 5083-grade Alplan aluminium alloy, which is highly durable and corrosion-resistant, and the pieces are then polished, hard anodised and weather sealed. Any leads are neatly tucked to the bike’s frame with bespoke clamps, allowing for easy removal of the front wheel.

How is the ARCC system controlled?

The new Gen II ARCC system is now complete with a handlebar-mounted Bluetooth controller, which allows the rider to switch between power levels and modes on the fly, for a smoother, more enjoyable user experience. The unit sits snugly in a lipped cradle with a magnetic grip, which means it is easy to take out but hard to accidentally knock loose.

Using Bosch batteries as a power source, which are readily available from hardware stores and relatively cheap, the unit can achieve a range of up to 75km, depending on the battery selected. They can also be quickly attached and detached from the pod when transporting the bike and are fast charging (tested on the 4 Ah Bosch battery).

With the ARCC Abington and ARCC Rosemont, you can also mount an extra battery to the downtube to extend the range, something Ebiketips did recently when they gave the system a once over. The Bosch batteries are also very hardy and have been rated to work after a 3m drop onto concrete and pleasingly they also come with their own two-year guarantee.

So how does the system ride? Well, for starters the system features a state-of-the-art torque sensor that determines how much force the rider is applying to the pedal and delivers power to the motor accordingly. This system, as opposed to one that uses a rider's cadence to ration the motor power, helps you feel like you're riding a conventional bike. This gives the impression of riding on a flat, even when tackling steep hills. Assistance can be turned off by dialling the power levels down to zero, allowing the bike to be ridden as normal, and power levels can also be switched between using the accompanying app (only available on iOS).

The ARCC Intelligent Drive Pod additionally features a launch control function. This can be activated by applying both brakes and pressure to the left pedal. When the brakes are released and the rider pedals, the motor delivers maximum power for a period of three seconds. This enables a fast, effortless, and safe getaway from lights and busy crossings in heavy traffic, as well as an extra boost for hill starts - a handy feature in urban environments, we'd wager.

That's our take on the ARCC Intelligent Drive Pod. Experience it for yourself by test riding a bike with the system installed at a Velorution store. Or if you're after more detail online, head over to look at ARCC bikes in more detail.