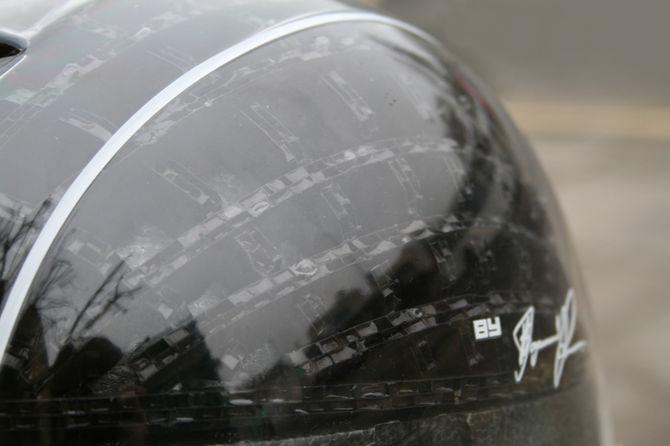 Designer Anirudha Surahbi’s Kranium liner is a brilliant innovation. It’s strong, flexible, and offers unrivalled protection to your head if you’re unlucky enough to come off your bike.

You hope that the helmet you wear will protect you in the a crash.
But safety has been slow to progress – until now. After three years in development, the Abus Performance and Abus Ecolution Helmet, each with a Kranium liner, marks a revolution in helmet technology. The Kranium liner was created by industrial designer and Royal Collage of Art graduate Anirudha Surahbi. He was inspired to come up with it after a cycling accident, which resulted in a cracked helmet and a concussion. “Helmets hadn’t changed in 40 years,” he says. If your helmet receives an impact it should be replaced because it develops small fractures,” he explains.

The inspiration for using honeycomb cardboard came from a nature documentary. He learnt that a woodpecker will peck a tree 10 times a second and its head goes through a huge amount of shock every time it makes contact. The woodpecker has honeycomb- structured cartilage that reduces the force of the impact. Surabhi saw that this structure could be an ideal basis for a ultra-safe, strong, lightweight helmet. The Kranium helmet uses laser-cut, dual-density recycled honeycomb cardboard. The board is built into a lattice structure, that is designed to be stiff in certain places and flexible in others. each segment is slotted together with a simple numbering system, and these pieces form a protective shell for your head.

When tested against the British Standards (EN 1078) at Imperial College, the Kranium absorbed more than three times the amount of impact energy compared with regular cycling helmets. So, during a crash, the impact is reduced, making it less likely you’ll suffer head injury. When standard helmets are tested according to the EN 1078 standards, they record impact values ranging from 200 to 250g. When the Kranium helmets were tested at TUV test labs in Germany and HPE test labs in Surrey, they recorded improved impact values ranging from 75g to 170g. Ani explains “Some helmets only just meet regulations and some helmets on the market don’t get anywhere near. This is the reason why we designed the Kranium: it’s stronger and safer.”