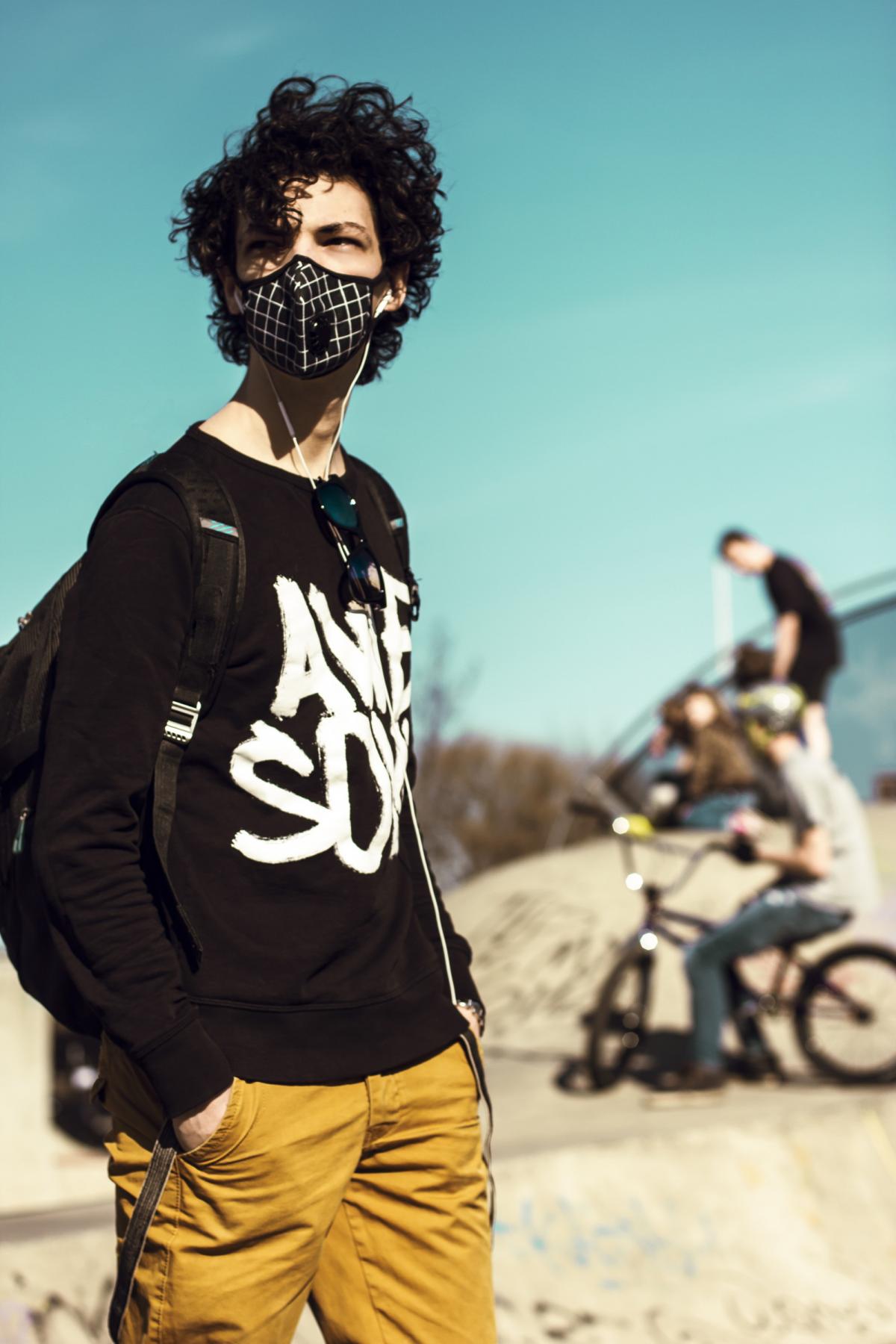 Some time ago the idea of buying water in a bottle seemed an irrational and bizarre concept. Yet today this practice is commonplace. With more than nine out of ten of the world’s population living in places where air pollution exceeds safe limits, could buying purer air become a comparable practice? In 2014 a bag of Canadian air was sold on eBay for 99 cents. A few years later Vitality Air now sells Banff National Park air globally. If buying a can of air for $20 seems a far-fetched way to safeguard the lungs of urbanites, what other measures are there to avoid the rapidly-degrading air quality in our cities? One particularly innovative product from San Francisco might be the answer.

Vogmasks are particle filtering masks that combine high efficiency with Rock Desert of Nevada at the famous Burning Man Festival. Seven years later, Vogmask founders Marc and Wendover Brown have evolved their desire to improve respiratory health by combining striking design with outstanding performance into a company which export its reusable masks to over forty- one countries around the world. The brand is recognised globally for comfort, fit, quality manufacturing, efficiency and style.

Wendover Brown describes the arduous initial process of bringing their new product to market “After one year of design, sourcing raw materials, working with the R&D division of a leading filter innovator, prototyping, initial performance testing, packaging, development of Quality Plan for manufacturing, and gaining Korea Ministry of Food and Drug Safety approval for international export, the first 60,000 Vogmasks came to market in March 2012. When we brought Vogmask to market, there were no other stylish, reusable, particle filtering masks to make mask wearing fun and cool.”

With major global cities struggling to meet NO2 emissions targets, wearing a Vogmask might shine a light on the need to change - becoming a proxy protest garment - a visual statement to symbolise the vulnerable nature of world citizens. Brown concurs. “Wearing a mask can be a statement of concern, and a demand for action as in the Clean Air Now billboard campaigns. We have worked to align our product with international efforts to clean the air and protect wellness including Clean Air Now (London), Catch Your Breath India, Utah Moms for Clean Air, Climate without Borders, Help Delhi Breathe, and others. Prevention is urgently needed now. We must change our behaviours and enforce new laws. In almost all regions of the world, Vogmask has started people talking and strategizing, taking action to influence public policy, and educating others on the civic responsibility to the environment and the future.”

Such symbolic application of an air respirator was very publicly adopted by Greenpeace in 2016, with activists attaching a mask to the statue of Admiral Lord Nelson, at the peak of Nelson’s Column in Trafalgar Square. Further masks were applied to statues across the city as part of a stunt to highlight the dangerous levels of toxic air in the capital. With governments slow to accept action is needed, can the person on the street effect any meaningful change? “Addressing the global issue of air quality requires reducing carbon footprint and instituting healthy behaviour individually, together with public policy to enforce decisions to protect the air and health of the planet.” She continues “The quality of air we breathe poses one of the most pressing global public health issues of the day. We do not have consensus or adoption of a solution outside of large cities which have experimented with restricted vehicle access, bike lanes, cleaner fuel mix, improved public transportation, incentives for sustainable energy use, controls on wood burning,and other measures to urgently improve air quality. Prevention is urgently needed now. We must change our behaviors and enforce new laws. There are many benefits to mask use, but we should not have to wear a mask to breathe clean air.”

Urban mask wearing evolved from Asian ‘smog couture’ - with city dwellers donning flimsy paper forms in an effort to avoid inhaling toxins and spreading airborne viruses. Later appropriated by K-pop, what was once a utilitarian medical necessity has now transformed into an à la mode fashion accessory. Might Vogmask be the logical progression of this trend into the mainstream? “Yes,” agrees Brown. “Vogmask has played a role as an avant accessory contributing to health and style, and making mask wearing happy and acceptable.” She expands on this idea “There are two distinct types of masks: surgical and particle. Surgical masks’ primary purpose is to prevent particles being expelled by the wearer into the environment while particulate respirators are designed to protect the mask wearer from inhaled airborne contaminants. General use respirators as personal protection dramatically increased beginning October 2013, when WHO (The World Health Organisation) declared particles in air pollution as carcinogenic, China’s 31 ‘airpocalypse’ attracted global media attention, and experts in global public health confirmed the public benefit of mask use.” In a post-modern world where sharing and ‘openness’ is a primary objective of being a valid member of the global community, mask-wearing could present a paradox or contradiction. Can covering your face therefore present a barrier to emotion and individuality? “We offer a range of styles precisely for this reason,” says Brown. “We hope that within our range, people can find something which expresses their identity and doesn’t isolate them from other people. In our experience, wearing a Vogmask provokes more random interactions and conversations than wearing no mask at all.”

Some of the larger fashion houses, including Chanel, Gucci, Dior, and Dolce & Gabbana, have included head covering styles in recent catwalk events. This spring Nike launched the ‘Pro Hijab’. Mask wearing is rapidly becoming symbolic of membership to the ‘urban tribe’. With re interpretation of the hijab (“modesty”), or even niqab as street wear, face covering suggests fellowship to the global social scene - one which thrives on breaking down boundaries. Is masking indicative of this new movement? “We certainly hope so. Haute couture brands predict fashion trends in a globalized consumer culture. We are happy to see face coverings as an accessory, especially as it makes it more acceptable.”

As a jazzy banderol to advance a worldwide dialogue for change, or a sub-culture lifestyle choice, Vogmask leads the way in the urban melting pot, where function meets fashion. Brown summarises this most succinctly “Vogmask is a beautiful tool for a healthy lifestyle.”

“When we brought Vogmask to market, there were no other stylish, reusable, particle filtering masks to make mask wearing fun and cool.”