An introduction to electric bikes 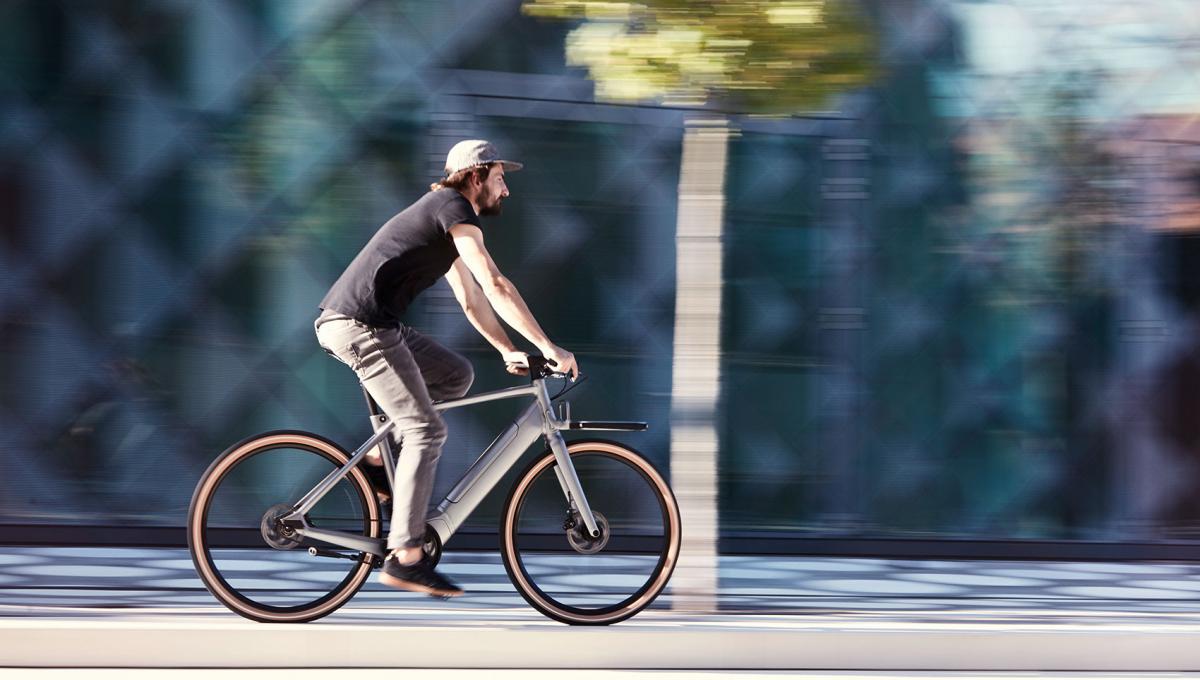 Making the leap into cycling can be daunting and tempting in equal measure. Perhaps you have looked on from the pavements as cyclists effortlessly glide by, crunching the mileage en route to work. You watch on as they’re inhaling lungfuls of fresh air, truly experiencing the joys of a sunny spring morning commute from the comfort of the saddle and all while getting a gentle workout.

With the swell of numbers taking to the roads, the barriers to entry are constantly shrinking away. It can very often be that final hurdle - “what about the hills” or “what about my dishevelled look on entry to the office” - that can so often be the stumbling block.

For us Brits, the barriers to slinging a leg overcome easily, but you’ll be surprised how most, with a little pre-ride preparation, are easily surpassed. So let’s begin by taking down some of the most common predicaments with a handy new tool at our disposal – the modern electric bike.

Using one study from Cycling Scotland (which closely mirrors many others of its kind) as much as 35.9% of people in the relatively hilly territory are citing distance as their primary factor for not cycling. 6.3% add that the hills are proving prohibitive to their efforts.

Step in the electric bike and its motor to put the wind in your sails and take the burn from your thighs. When it comes to the hills a typical electric bike will give back what the rider puts in and thanks to torque sensors, understanding when that input needs to kick up a gear.

Does the price tag put you off? For many, it can, but consider the cost against the aforementioned alternatives. The average petrol car is said to cost around 14.19 pence per mile in fuel costs alone. Then there’s tax, insurance, maintenance, parking and MOT, to name just a few extra weighty costs. You may be surprised to learn that modern electric bikes can run at just a fraction of this cost, generally costing around 0.13 of a penny per mile in associated electricity costs, or between 5 to 10 pence per charge.

Above and beyond negligible charging costs, the electric bike shouldn’t set you back much more than your typical bicycle in servicing costs, barring a battery replacement at intervals ranging between 3 to 8 years, depending on your spec choice.

Besides, electric bikes are widely used by the Scandinavian people and they’re said to be the happiest in the world. Is there a link?

Well as it turns out electric bike sales are surging in Northern Europe, now making up around 10% of sales in Denmark. Slightly further south the trend has accelerated faster still. In the Netherlands around one in three new bikes sold now has motor assistance.

For countless people, cycling’s too often exaggerated presence in the press can create a perception that riding a bike on the roads can be dangerous. Depending on your local infrastructure there can be occasional moments of concern, but rarely to the extent, you may be led to believe by the press and, with electric assistance, it’s that much easier to get ahead in traffic.

Providing ample ammunition for your legs, a typical electric bike motor will take the sting out of acceleration, helping riders quickly get up to speed (15.5mph at top speed if in the UK). This nudge off the lights will enable the city cyclists to quickly get set on the pedals as the amber turns to green and thus quickly move clear of left hook dangers at junctions and into a comfortable and controlled stride alongside others on the road. In cities getting ahead of those exhaust fumes is, needless to say, a breath of fresh air.

Of course, it’s not all about putting the power down and hitting new peaks, the bicycle is after all a form of transport and such things need to blend seamlessly with our routines. Many of us will seek to go about daily errands by bike but is it right to assume you may struggle to haul larger loads, most e-Bikes will take the sting out here too. An increasing number of dedicated electric cargo bikes now come with motor assistance, in fact, many postal companies are turning to this means of transport for inner-city deliveries citing improved efficiency and costs savings over vans.

But isn’t it cheating?

This is a common theory put down among seasoned cyclists and one that is poorly considered. In fact, research published in the European Journal of Applied Physiology has shown that, despite the assistance, electric bike users very often do see notable improvements in aerobic capacity and blood sugar levels. “Commuting with an electric bike can help individuals incorporate physical activity into their day without requiring them to set aside time specifically for exercise,” said James Peterman, a graduate researcher in the Department of Integrative Physiology at CU Boulder.

Furthering this study, researchers in Norway discovered through extensive tests on users ranging 23 to 54 years in age that, even with pedal assistance, riders experience physical exertion 95% of the time. In these tests, electric bike use was found to place users at 8.5 times more active over their resting state, while pedal power registered at 10.9 times more active, a closer margin than previously assumed. Just a 12% difference in lung output was recorded between pedal power alone and e-Bike users.

For these reasons, the electric bike can be a lifeline to a wide variety of people who may not otherwise ever get back in the saddle. As put by electric bike market researcher Ed Benjamin “I expect nearly everyone who can ride a bicycle to eventually be an electric bike rider for some purpose. That ranges from children to elders, from rich to poor, and includes many who are not strong enough, or perhaps have health issues that would limit them from using a manual bicycle.”

Initially the demographic for electric bicycles were considered to be those in the over 50s age bracket and indeed there is greater interest here than in any other age bracket, but that tally is rapidly decreasing. With the advance of technology, electric mountain bikes, folding bikes, road bikes, and electric gravel bikes have drawn in new and often younger blood. Some of Europe’s biggest bike makers even make electric bikes specifically for children now.

In short, the electric bike is a leveller for the family.

Is all of this really necessary? It certainly is if you’d like the entire family to see the very same sights and feel the very same long ride satisfaction. In short, the electric bike is a leveller for the family. Perhaps your clan is led by a keen road cyclist who waits at the top of each summit impatiently while the rest of the family follows with pained looks upon their faces and empty water bottles. It could be that an ailment or disability prevents a member of the family from experiencing the same joys as those more able.

Those barriers are now entirely removable, meaning the experience and sense of accomplishment truly is achievable to all, even those who may previously have sworn never to have set the pedals in motion again having not met the pack leader’s enthusiasm previously.

Modern electric bikes have largely phased out the twist throttle of old and phased in the now commonplace mid-drive motor, something you’ll find a much more reliable and better-handling solution. The vast majority of these systems require the user to begin with some gentle input very briefly before the assistance kicks in. Indeed, most riders will only find that firmer assistance comes into play when they are faced with hills, something determined by in-built torque sensors.

As the technology progresses, so too is the intelligence of such systems. At the time of writing, we have learned of new systems coming to market that link to heart rate monitors that will adapt output and make gear changes automatically based on a pre-determined comfortable strain level on the rider; perfect for those returning to exercise after a long period off the bike.

As with the electronics found within your pocket, or on your desk, the integrated technology has now developed beyond its infancy and is becoming ‘smart’. Electric bike batteries now power such added benefits as immobilisers to prevent theft, integrated lighting and a cycle computer, as well as miniature cameras to record your adventures. It won’t become mandatory to buy into this tech, but in the city, many of these advances are welcomed.

Letter of the law

You can ride an electric bike (‘electrically assisted pedal cycles or EPACs) in England, Scotland and Wales if you’re 14 or over, as long as it meets certain requirements. You do not need a licence to ride one and it does not need to be registered, taxed or insured. All our bikes are EAPC which means they follow certain specifications to qualify. The current speed limit for EAPC bikes is 15.5mph (25km/h), after which the pedal assist will stop. If a bike meets the EAPC requirements it’s classed as a normal pedal bike. This means you can ride it on cycle paths and anywhere else pedal bikes are allowed.

And once you've experienced one, you will understand the "e-bike smile" everyone is talking about.

It is very often the case that sceptics are won over once they experience the electric bike, with the phrase “e-Bike smile” coined to reference that moment of realisation of how an electric bike could change one’s life for the better. Tarmac-going electric bikes are not ‘for’ cyclists. They are instead for those who have a journey to make. Indeed, this notion has been capitalised upon by numerous outdoor hubs in Europe and in the UK where you’ll now be able to experience the pedal assistance tailwind as part of your holiday in the mountains or as part of taking in the sights during a city break.

Realising that these vehicles will allow grandparents and even kids to summit the very same hills pedaled by the more athletic members of the family, demo hubs have become an economic boon for such outdoor spaces and should be experienced by anyone on the fence when it comes to buying their own bike.

Purists may still argue until they’re blue in the face, of course, but the electric bike is not for them; instead, it is an opportunity for those who may have no intention of becoming ‘cyclists’ to try a new means to get from A to B, no matter how far their health or willpower will stretch.

Here at Velorution, we have electric bikes for all adventures, commutes and leisure activity, so if you have any questions, or would simply like to experience the natural tailwind and understand the phrase “the e-Bike smile”, then pop in and demo one of our e-bikes at your convenience.