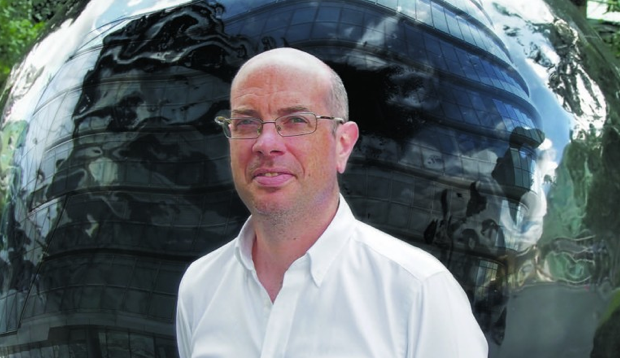 We catch up with Cycling Commissioner for London and senior reporter for the Daily and Sunday Telegraph Andrew Gilligan, the man promising to let city cyclists boldly go where no cyclist has gone before, to find out what’s new since we last spoke for our inaugural issue…

London’s ‘cycling czar’ is a busy man, dashing between meetings on behalf of the Mayor’s office while also holding down a job with The Telegraph newspaper. We caught up with the journalist-turned-saviour-of-cyclists to find out what has changed since we last spoke. We wanted to discover whether the Mayor’s dream of cycling ‘super highways’ for 2016 was still on track, if London is getting any safer for bike users, and whether Amsterdam’s apparent utopia for cyclists could be transferable to our own biggest city.

We want to catch up with what’s happened since last time we spoke, to see whether there has been progress regarding a ‘Crossrail for cyclists’ and the idea of a Central London Bike Grid.

You’re about to see actual routes being consulted on and delivered. The first one has just gone out for public consultation; it’s a bi-directional segregated track across Vauxhall Bridge and through the Vauxhall gyratory. It means that cyclists can avoid what I think is the nastiest gyratory system in London, where a cyclist was indeed killed recently. You’ll be able to pass through that safely, in both east-to-west and west-to-east directions. That’s the first of the major schemes we’re doing and there’ll be a whole slew of others in the autumn.

That makes it sound like you’ve directed your efforts at dangerous hotspots as a priority.

Well, we have a network of routes in mind, and the first ones are just starting to come off the turntable now.

Are we still on target for completion in 2016, the date originally given?

Yes, I think so. The main ‘Crossrail’ route from east to west is going to be consulted on in the autumn and will begin construction next year. Then it should be open in 2016. It’s not like we’re actually building Crossrail; I mean, it’s not without its complications, but obviously it’s not as complicated as something like Crossrail. What’s happening at the moment is a very important phase, which is trying to get as much agreement as possible from what we in the game call ‘stakeholders’, namely local councils and residents. And when we’ve got that, it should ensure the whole thing goes that much more smoothly when it is formally consulted on and built. These schemes are going to be fairly controversial, as they do involve taking road space away from people. Not everybody’s going to love them, but we just have to make sure we get as much support as possible.

I understand there were trials undertaken in advance of these proposals being put forward; did they throw up any novel ideas?

There have been off-street trials of various novelties that we’re planning, such as cycle-separated junctions. Those trials are finished now and they showed that we’re ready to put that kind of stuff on the road. But we haven’t done any on-street trials, I don’t think.

Can you elaborate on the so-called Quiet Ways and whether they’ll actually be quiet?

They’ll be quiet in terms of not having motor traffic on them. I know there may be hundreds of cyclists, but even hundreds of cyclists don’t make much noise. The idea is that they will be backstreet routes through canal towpaths. You can link up an awful lot of those to make good effective cycling routes all the way through London. Nearly all of those roads are owned by the boroughs, so there’s been a process of agreeing those routes with them.

And what about the thorny issue of where people can actually park or station their bikes if they take advantage of these new official ways of travelling around London?

That’s very much a borough problem. We also have to get the agreement of the boroughs to put more cycle stands on streets. People have got this lovely idea that the Mayor of London can dictate or order something, and it happens. It just isn’t true I’m afraid. We have to work by consensus with the boroughs. Getting their agreement takes a while.

At the same time the idea of cycling seems to be getting ‘sexier’ and figures suggest there are more and more cyclists on the roads.

I think it appears to be growing in popularity because, first, there are more people in London and, second, more people are waking up to the joys of cycling. I think more people are trying it and they’re spreading the word to their friends. And, like I say, there are simply more people in London full stop. There’s been a growth in the use of all modes of transport. Cycling’s share has gone up because people are realising that London is actually quite a nice place to cycle, even now. It’s going to be even better when we’ve got our routes and schemes in place.

A more personal question next Andrew, about your own fitness levels since you last spoke to Velorution. Have you kept up with your own cycling?

I cycle everywhere, in London anyway. Well, almost everywhere, as I do get the occasional train. I’m pretty sure I weigh the same as when I spoke to you last, and I don’t measure my fitness levels in any other way, I’m afraid. I basically cycle to get to places. If I want to get somewhere I’ll get on the bike, but I’m not someone who will do 25 circuits of Regent’s Park in Lycra.

Have you ever worn Lycra?

No. Lycra has never touched my body.

You mentioned the Royal Parks. Any plans you can tell us about their use for cycling?

Obviously parks are places to walk and cycle. They’re ideal, because they’re quiet, beautiful and peaceful. We are talking to the Royal Parks about these schemes and several of the routes are going to go through them. We’ve definitely been talking to them about Regent’s Park and Hyde Park in particular.

I’ve also read about fact-finding missions to the Netherlands.

Yes, I did go to the Netherlands and was obviously very impressed, as everyone always is, about the level of provision for cycling. But nobody should imagine that we’re going to be getting anything like as good as the Netherlands any time soon. It would take decades of work. They have a separate cycling lane for every road, and the whole city of Amsterdam has a cycle culture. Comparisons are often made between London and Amsterdam, but Amsterdam is a village compared to London, so actually there is no comparison. Our closest match for Amsterdam is somewhere like York, which is a city that is small enough for everyone to be able to cycle everywhere. London’s a great sprawling megalopolis with very large numbers of people, huge volumes concentrated in the centre, and gigantic distances. We always get compared with Amsterdam and Copenhagen, but there are 40 percent more people in London than there are in the whole of Denmark.

But were there any inspirational ideas that you picked up on and brought back?

Yeah. We want to do separated lanes and improve facilities for cyclists. Amsterdam is a good model of the kind of place we want to move towards, but while we might become more like Amsterdam, we’re never going to be Amsterdam. We’re just fundamentally different places. I want to change the culture to become a bit more like it is in the Netherlands, where people do cycle in their normal clothes on fairly clunky bikes and go slowly. Here it’s a bit more Darwinian.

How are you finding juggling your two careers?

I’m still at The Telegraph. Well, it sort of works, but I do rather wonder whether I should just concentrate on…

No, the cycling. [Laughs] But I haven’t made that decision yet.

Just to get back, briefly, to road safety, which obviously remains a hot topic. One of the Mayor’s aims has been to encourage more female cyclists as well as older cyclists onto the roads – basically anyone who might have been previously nervous about getting on a bike in London.

The problem is mainly one of perception. Cycling in London is actually fairly safe in terms of death and serious injuries per the amount of cycle journeys made. 2013 was the second best year we’ve ever had – by which I mean there has only been one year that was safer in London’s history. But that’s not what the perception is, of course. People perceive it to be very unsafe. So part of my job is about addressing not only actual safety, but also people’s fears.

It reminds me of the debate about crime 20 years ago. Fear of crime was a more serious problem than crime itself. Both were problems, but fear was the more serious one. Part of what these routes are about is reducing that fear.

Presumably these routes are going to be widely advertised to try and change that perception, but that gearshift, ultimately, is just going to take time.