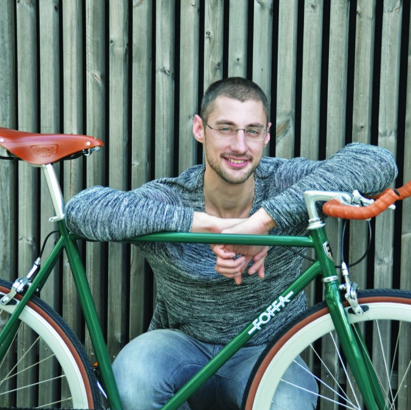 Dani Foffa, supplier of classic style single speed and geared bikes, shares his passion for his products and describes their perfect suitability for the urban environment…

Pursuing our passions is something each of us craves, and Dani Foffa’s story is more inspirational than most. In 2007 he swapped a job in the city for one restoring classic bikes in his bedroom, graduating to opening a shop in 2009.

His classic-styled, entry-level, single-speed cycles are currently flying out of Velorution’s doors, priced at a very affordable £359.99. Weighing 10.9kgs, the bikes are constructed from a lightweight steel frame set and feature a gear set that allows for low effort cruising around town, as well as the ability to get up gradual hills without any problem.

“We switched to our own-brand bikes because it was getting harder to get hold of vintage bikes to restore,” Dani recalls. “And it made sense for us to order containers of our frames from Taiwan and the Far East.

For five years we had the shop where we used to do custom builds, and the bikes started at £550. But after building nearly 5,000 bikes we had a rough idea of what people wanted, and we wanted to make our bikes a bit more affordable, so we decided to close down the shop and launch a range of pre-built bikes based on the aesthetic designs that we used to do so well
in the past.”

Since this February 2014, the business model has changed completely from running a workshop and serving customers to being reliant on re-sellers such as Velorution. “They’re long-time supporters of ours, and have been fans ever since we used to do the custom builds,” Dani says. Foffa Bikes now operates from a distribution centre outside of London. “Our overheads are a lot less, while the quality of our bikes has remained the same. We’ve been able to pass on the savings to our customers and offer our bikes at more affordable prices. That has led to a massive amount of interest, so that’s why it feels like a completely new business to us.”

At the same time Dani says his typical customer hasn’t changed, usually men aged 18 to 40, “who want a nice lightweight commuter option made of decent components. What we’ve found quite interesting is that people are choosing our bikes as very much an extension of their personality. They might even choose different bikes for different stages of their life. I used to ride a bright yellow one and now I’ve changed to two black ones. My bikes these days are very ‘boring’ yet very practical and very comfortable – and I guess that sums me up really.”

Dani adds that racing green, pale light blue and black single-speed bikes have proven to be the most popular with customers. “We don’t go for the candy colours, because I grew up in Italy and I’m very picky about what I think is a good design. The bikes are again based on the custom builds that we did in the past. I think single speed brings a lot of purity into cycling, and it’s ideal for commuting in a place that doesn’t have too many hills. It’s a pleasurable bike to ride. You don’t have to think about whether to change gears, or if the gears are too high or too low; there are less things to go wrong and it’s just lighter as well, so it makes sense. For us it really is about giving our customers good-quality bikes at affordable prices.”