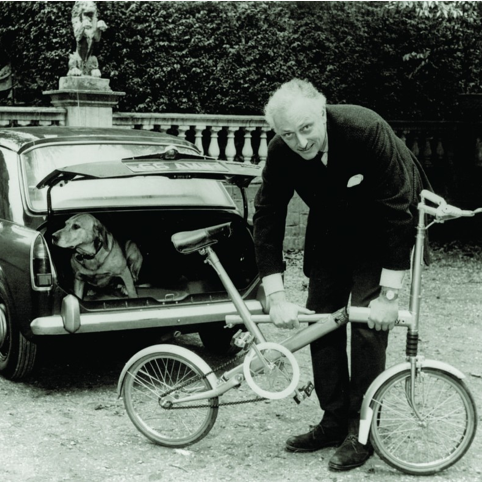 When Alex Moulton launched his revolutionary small-wheeled, full-suspension bicycle at the Earls Court Cycle And Motor Cycle Show in 1962, he was very excited by the reaction of the public to his creation. David Duffield, then Moulton’s marketing manager, later commented that “we had to beat them off with sticks, such was the level of interest. We were completely overwhelmed”.

What Alex can’t have imagined was celebrating the 50th anniversary of the Moulton bicycle. After all, he was 42 at the time of its launch, and he wouldn’t have foreseen the roaring success of the early models that soon lifted Moulton bicycles into second place (behind the great Raleigh Industries) among cycle manufacturers in Great Britain. Who would have predicted Raleigh’s response to the Moulton, the RSW 16, and the plethora of other small-wheeled cycles, such as Dawes Kingpin, Raleigh Twenty, etc, were all derived from the Moulton design?

Less than five years after the launch, Moulton Bicycles Limited was sold to Raleigh, who continued manufacture for another seven years. Following the cessation of manufacture of the Moulton Mk III in 1974, it looked like the story of the Moulton bicycle was over. This proved to be premature, but it was to be another nine years before they were again available for the general public to purchase.

Dubbed ‘the advanced engineering bicycle’, these new models – initially the AM7 and AM2 – were of radically different design to their forebears. They shared the same genealogy – small wheels, full-suspension - but the architecture was that of a three-dimensional space-frame girder. Diamond frame bicycles are triangulated vertically and are hence poor in lateral stiffness and harsh in ride. Moulton solved the problem of triangulating a bicycle frame in three dimensions, yet still being able to make it fit between the rider’s legs. The new Moulton bicycle was designed for high-performance and to be “a pleasure to own and use”, as Alex himself put it. It quickly won acclaim from cyclists and others – designers, engineers, architects. Today, an AM2 is on display at the Museum of Modern Art in New York and the Moulton bicycle is regarded as one of the greatest works of British design.

The first AM Jubilee bicycle was launched in 1987, and to mark this Silver anniversary, the Ferrari red frames were finished with silver coachlines. This bike shared many attributes of the AM14 and introduced the Moulton Wishbone adjustable handlebar stem. Original Jubilee and Jubilee L models (the ‘L’ indicating ‘light’ – these models having the lighter frame based on the AM-SPEED Race Across America project) remain in high demand in the collectors’ market and it is always pleasing to see a Jubilee still being used as the designer intended – for journeys long or short, on good roads or bad.

With the Golden Jubilee in 2012, it seemed appropriate to return to the tenets of ‘the advanced engineering bicycle’ and ‘a pleasure to own and use’. The Moulton Jubilee introduced greater versatility in possible specification, together with detail improvements to improve durability and rigidity without increasing weight. Of more significance was a return to geometrical aesthetic that existed in early F-Frame Moulton bicycles and had fallen away over the years. Alex often maintained that aesthetics had no place in his work – admittedly, there are times when they did not – but he did admit that on ‘visible’ artefacts he was always concerned of how pleasing something was to the eye, and always sensitive to the emotional response of the user.

With the Jubilee, the last project he had input into, it is fitting that this aesthetic returned, and appropriate that the limited-edition versions were painted in his favourite colour: Bugatti blue. Somewhat of a departure from the steely grey, so beloved of engineering designers, that adorned the original AM7 series.

Of course, longevity is a Moulton characteristic. Most of the early AM7 bicycles are still in use – and nominally worth much more than they were 30 years ago. Moulton suspension systems are intrinsically designed to be durable, and are largely field-maintainable should the need arise, be it in London or Lagos. Such is its commitment to its products, The Moulton Bicycle Company is proud to be able to supply just about every spare part, or offer a suitable alternative for all Moultons manufactured since 1983.

Small wheels yet a big performance… that’s just a part of the appeal behind the Mouton TSR range of bikes, each a hymn to urban dreams.

Engineered for over 50 years and handcrafted in Britain, the Moulton bike is the original full suspension, separable, small-wheeled high performance machine… world revered for its efficiency, durability, comfort and speed.

TSR 2[/caption]This bike revels in the beauty of simplicity. Its beating heart is a Sturmey-Archer ‘kick shift’ two-speed gear with an integrated back pedal brake plus belt drive. Two well-spaced ratios will keep you weaving between commuters on this feisty collectable.

Versatility is the name of the game here. This classic machine is at ease both on countryside lanes and the mean streets of the city. The secret weapons here are wide ratio gears and all-purpose tyres, while Sturmey-Archer gears provide easy shifting, even when stationary. The TSR 8 also boasts a wider gear range than the TSR 9.

Sharing its gene pool with the TSR 27, the TSR 9 is, in fact, a lighter but equally versatile machine that will have heads and wheels spinning thanks to its adoption of all the defining Moulton features. Delicate of frame yet strong, here is one bike that can handle
all but the steepest of trails.

If fast road commuting, touring or day rides are your sort of thing, then the TSR 30 is your sort of bike. Ride hell for leather through the urban environment, or load up and head wherever the trail takes you.

At times you might want to leave the concrete jungle behind and experience a variety of terrains. The Moulton TSR 27 is one bike that gives you that option – and in comfort too. So say ‘tah, tah’ to the tarmac and enjoy this true go-anywhere bicycle that combines grace with gumption.