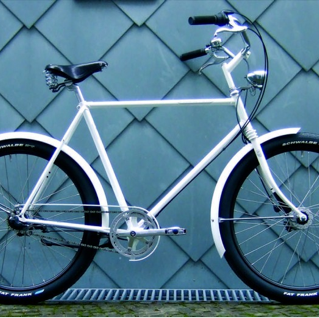 German bike manufacturer Retrovelo specialises in one-of-a-kind commuter and leisure bikes that combine quality with beauty, and a return to true ‘retro’ values…

“We would be very happy if you were to love your Retrovelo cycle.”

As a small manufacturer based in Leipzig, Germany, Retrovelo says that it’s not looking to pander to the mass market but rather to carve out its own specialist niche. Its design aesthetics hark back to the days when quality and beauty transcended the latest hype – hence the ‘retro’ of its company name. That said, these are not museum pieces but rather fun, everyday bikes, to be ridden day in, day out. As Retrovelo’s Matthias Mehlert and Frank Patitz tell us: “We love to ride these bicycles every day. Retrovelo was born out of our passions, but also German practicality.”

The pair reveal that Leipzig very much has its own cycling culture and that, for them, ‘retro’ is not about jumping on a hipster bandwagon that hails everything from days gone by as automatically the coolest, but rather denotes a return to simply appreciating a beautiful bike construction and design. In other words, something that in itself could be hailed as ‘classic’. The duo declare that they do not slavishly follow ‘mass style’, but instead look to provide a specialist product, designed and constructed in Leipzig, parallel to, but not a part of, the large-scale industry there.

“We would be very happy if you were to love your Retrovelo cycle so much that you would never want to give it away,” they say. “Our philosophy since the beginning was to produce bicycles that would provide you with as much fun during your daily commute as they did in your leisure time. At the same time they had to possess both a sense of style and an understanding of function.”

To this end, Retrovelo hopes that its bikes, split between Classic and Modern series for both men and women, are as individual as their eventual owners – or, as it calls them, ‘bike pilots’. “Out of this individualism, pleasure can be derived,” they say. “We continue to ride our own bikes daily and test their performance, both on the road and in specialist facilities. We’re continually refining them to ensure that, both stylistically and practically, in our bikes we have a companion we can view with the utmost confidence.”

Interestingly, the manufacturer notes that its bicycles for women are proving the most popular in the range, and puts their success down to the realisation that “women have a different riding culture to men. We also build the bikes to order according to the customer’s personal wishes”. Cream and black are the most popular colours. Customer feedback is described as essential in the development of the brand, because, as they reason, “without the customers there would be no Retrovelo”.

As for where the bike brand is heading in the future, the duo recommend you check out its Facebook page for updates and events.