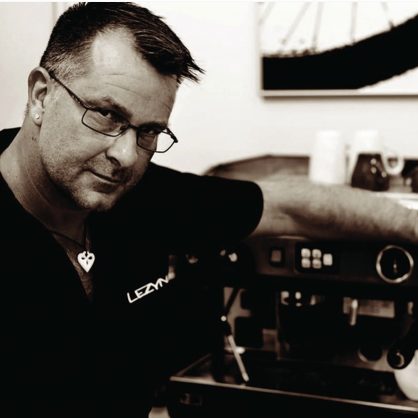 Interview with Micki Kozuschek, founder and owner of Lezyne.

I'm a crazy German guy who has no college education or any engineering experience, and I was never a sales person. I have learned everything by being hands on.

Who are you, and how did you get started in the bicycle business?
I’m 47 years old, born in Poland, then raised and educated in Germany. When I was young my mum bought me all sorts of do-it-yourself bicycle books and I read up on every bit of bicycle history. I was always fascinated with components, so I pulled my bikes apart and put them back together. I started doing the same to my buddies’ bikes; back then there was no suspension, no hydraulics, everything was extremely mechanical. I was always very hands on and analytical.
When I was 12 I became a road cyclist, and at 15 became a triathlete, which initially brought me to the States. At the age of 18 I travelled to the US to train and race in Davis, California, where I met my wife of 23 years, Susan. I went to business school for two weeks and didn’t like it, so I decided to start my first company at the age of 21. I imported clothing and triathlon goods out of the US into Germany. After two years I decided to make bicycles, so I flew to Taiwan. During that time I started to design a lot of products like hubs, brakes, levers, cranks… all sorts of goodies.
I emigrated to the US when I was 28, but I’m still a German citizen. I started the company Truvativ, producing millions of components for the bike market. Seven years later, in 2005, SRAM purchased Truvativ, providing SRAM with a line of cranks, bottom brackets, handlebars, stems, pedals, seat posts and chain retention systems.

Now you had a lot of money and no job, how did you fill your time?
I took on a large project redesigning our house in California, which took a year. Eighteen months after I sold Truvativ, I was starting to get restless and I even considered producing an independent movie (though I didn’t!). I was unhappy and didn’t know what to do. Susan and I were sitting on the plane returning from our winter holiday with the kids and she said, ‘Why don’t you start your own company again?’ I started talking to one of my marketing guys from Truvativ, Dillon, and we agreed to start a new brand.
Because of my non-compete contract with SRAM, I chose to create a range of accessories. I went to the store and bought $2,000 of accessories, everything I could get my hands on. Most of it didn’t work; it was all plastic and none of it held its promise.
If you have a flat tyre in the mountains and you can’t pump it up, you’re walking. I just laid it all out on the table and thought, ‘This is easy for me’. We established a new market of accessories that behaved like components. I got a new computer and started designing parts with Dillon; Dillon was designing saddlebags and hydration bags, and I was focused on mechanical products.
I flew over to Taichung, rented a shell unit, then later designed and built a new factory that is now over 4500 sq. meters. The first two years were really tough. We have a house there because Lezyne staff from the US go over very frequently.

And the business went on to become a success?
After the Eurobike Trade Show in 2007, we had a world full of distributors. Now we have almost 200 people. In the US I have 25 people: electrical engineers, mechanical engineers, designers, programmers, web and marketing people. The company is set up with fibre optics between the US and Taiwan, and both factory interiors look identical – the same furniture, even the same coffee machine.
The resources that we have allow us to work around the clock. At 5.30pm in the US there will be at least ten Skype conversations in parallel in all the different offices between countries. We have projects so big now that we have combined teams in Taiwan and America working on the same projects. We are very much one international company and we maintain very tight control on our operations.

The exquisite design and intelligently engineered products reflect your German origins, do you agree?
Although I have lived in the States for many years, a big part of me is still German. I think in that way, very linear, which is the way we were educated back then. We analysed everything in great detail and that set the pace for me. Having said that, going to the States at such a young age allowed me to have entrepreneurial freedom.

How are the territories split?
Europe is the largest market for us; it’s very diversified and split into so many different countries. Each distributor works within its own territory, which makes it a lot simpler.
This accounts for 50 percent of our business.
In the US we have many distributors competing in the same space. All markets are growing, including Asia Pacific, which is now over 20 percent of our business, and we are making some real headway in China.

Which products do you like the most?
I love the original products that I personally built; they mean a lot to me because they address some of the inherent issues. I love our pumps as they blow a lot of air; they are minimal in size and work really well. I also love our tyre levers because they don’t break. We produce over half a million alloy, pressure and road drives a year. I really like our Mini, Power and Super lights. They are completely machined out of aluminium, run for a very long time and give off infinite light.

What’s new?
I am very excited about the GPS computers we are working on; there are going to be some very cool and sensible solutions. We have our core mechanical products, like pumps and that’s where my heart is, but there are so many electronic products that don’t keep their promise. As much as we continue our core mechanical development, we now have electronic development. Whether I like it or not, the world is becoming more electronic, but there are still a lot of mechanical aspects to these products. Next year will see the GPS products that really challenge us as a company and we are investing into our business to ensure we keep moving us
forward with the times.