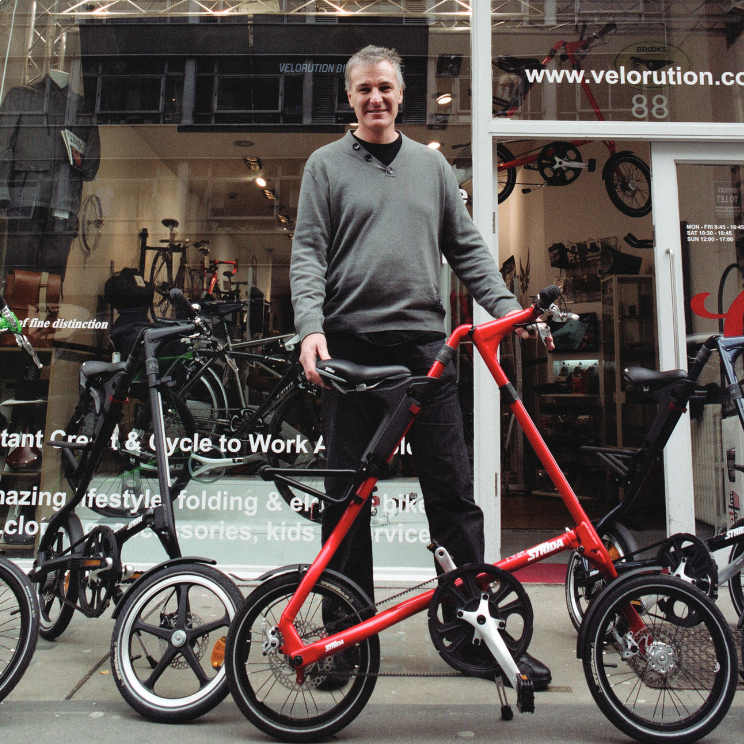 Velorution meets the man behind the Strida, the smart folding bike for the discernible commuter, and discovers Mark Sanders is a visionary engineer who ignored career advice to design toasters...

A folding bicycle is a fantastic solution for a commuter who takes the train to work, and the Strida was specifically designed with this is mind. Unlike the traditional chains on most bikes, it’s fitted with a greaseless Kevlar belt drive, so you don’t have to worry about getting bike grease on your clothes, and isn’t messy when you fold it. The ‘A’shape frame is light weight, but can carry up to 110 kilos, and with it’s long ‘buggy-like’ collapsible design, the Strida fits into narrow overhead storage compartments, and can be wheeled along even when folded. Originally designed in 1984, the Strida has evolved over the years and is now available in three models, the LT, SX and Evo, and is available in a huge range of colours. However the revolutionary concepts behind it’s design are what makes Strida the great folding bike it remains today. Mark Sanders, engineer, industrial designer and the man behind the Strida, popped into Velorution for a chat.

Velorution: In 1984 you had the idea to create a folding bike. Where did the initial idea for the Strida come from?

Mark: Well, the weird thing is I was going through my petrolhead phase. I used a bike a little bit for work, but mainly I was into restoring cars. I gave up a well-paid job as a design engineer to return to college, and had to travel from Windsor to London every day. It became a real challenge to find the fastest, most economically sensible route. I tried to drive, but that was useless with nowhere to park, plus the traffic jams.

Trains were fine, apart from the extra mile at each end. At that time, folding bikes were in their infancy. You could get a Bickerton or a Brompton, and that was it. I wondered, could there be something simpler than them? All you’re trying to do is connect the house and the station – you do the big journey on the train, and a little journey at either end. So why not design a bike specifically simplified to do that?

As it happened I needed to have a project that combined engineering and design, except my tutor said, “No, no, no! Bicycles were designed a hundred years ago. What can you bring to the party? Choose something simpler, like a toaster.”
I think there was once a famous American patent worker who at the turn of the century said, “You don’t need patents anymore, because everything useful has already been designed.” Think of what has happened since then!

This may surprise a lot of people but wasn’t the design based on a pushchair?

Mark: Yes, exactly. A pushchair is going to spend, by its nature, 50% of the time folded and being pushed along, so the baby buggy was the obvious thing to relate to, as it’s long and thin, like an umbrella or walking stick, with it’s own little wheels on the end. I figured, well, you’ve got a free pair of wheels on a bicycle, so why not use them?

Were you a cycling enthusiast when you decided to design the Strida? What does cycling mean to you?

I always rode bicycles as a kid, but for me it was more of a getaway vehicle. When you’re 11 years old you can escape – ‘Just going for a bike ride Mum!’ The fact you can get miles away, going to new, weird places that you’re not really allowed to go, but who cares... Fantastic! Plus that feeling of freedom. I didn’t really get the thing about going particularly fast.

Where did the name ‘Strida’ actually come from?

After designing the Strida, as part of my graduate studies on the Masters of Industrial design course at the rCA in 1984, I met a marketing guy who wanted to build the company and raise capital investment.
So he put together the business plan, along with his board of directors, who then employed a professional marketing company to come up with a name. They used one of the top Pr companies at the time. They obviously spent a fortune, and came up with so many names, their favourite was ‘The Blake’. They were just about to go for it, when the director’s nine year old boy, who was sitting at the table with ‘the big people’, overheard this conversation and asked, “daddy, why don’t you call it the ‘Strida’?” The dad asked why, “Well, you sort of sit astride it, and you kind of stride with it...” The penny dropped. The director had spent all this money, and the kid came up with a brilliant name.” I think the company gave him around £150... That’s a lot of money at that age!

What do you think of Boris Johnson’s plans for cycling in London?

Having spent some time in Amsterdam, anything that makes London more like Holland would be great, but I think they just have such a long culture of cycling in Holland that cycling is classless. They grow up cycling bikes to school, granny rides a bike, dad rides a bike; it’s a sociable thing. They breathe in the air, they say hello to each other. It’s so inclusive, it’s wonderful.

Do you think the surge in the urban cycling market comes from the top down – i.e. via government-initiated schemes – or bottom up through sport, music, fashion and popular culture?

I think it has to be bottom up and top down. I think, going back to the purist thing, a bicycle is this human amplifier; a thing that takes you three times the distance in three times the speed, with the same energy as walking. That’s my favourite little stat that I like to tell people. In the city, a bike just makes so much sense.

Belt-drive systems seem to be all the rage at the moment. What are your opinions on them?

It’s really great to see some lovely examples of belt driven bicycles in Velorution, because many years ago I was questioned by many respectable bike designers about using a belt drive on the Strida. “They are OK on packing machinery, but you’ll never get them on a bike!”

So when you designed the Strida, was it a surprise for people that it had a belt drive?

It always had a belt drive, and a lot of people just said it wouldn’t work. They looked at it without even riding it, classic armchair critics – “Triangle? It should be a diamond frame”; “Belt drive? Should be a chain.” But when I asked them, “Have you actually ridden one?” they said “No.”

Well, it’s been tried and tested. The Strida has been around for more than 20 years now, and has been bought by thousands. Do you think it’s safe to say you proved them wrong?

Well... When Apple made a glass phone, not many people thought that would work either!