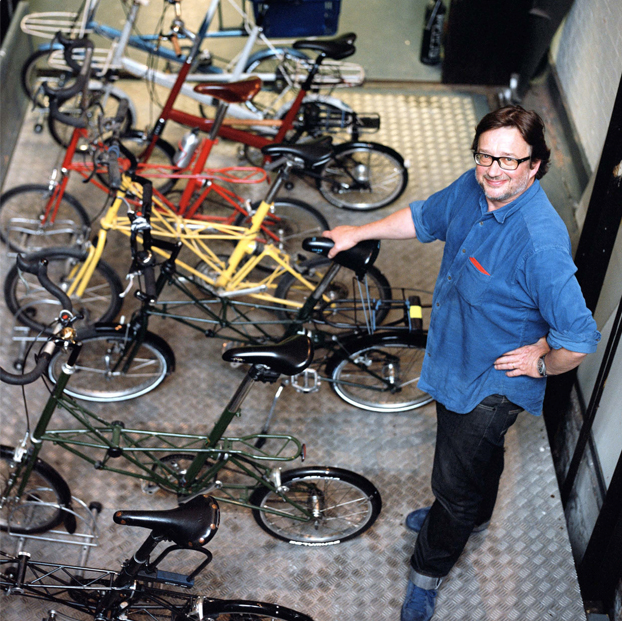 What do you do for a living?
As a child I aspired to being an inventor, and I guess I am about as close as I can be to my childhood ambition.

What's best about cycling?
The magic moments: my very favourite place to cycle is over Tower Bridge in London.

What are you currently riding?
Moultons!

What was your relationship with Sir Alex Moulton?
I met him at the V&A, at a launch of the Ford Sierra, and there was an exhibition on at The Boiler House. It was in the early 80’s some time. We got chatting there and he invited me down to Bradford on Avon, where I bought an AM5, which I had for about 20 years before I swapped for a Jubilee.
Alex was a bit of a mentor to me, and he taught me an awful lot about marketing, and in a way, about engineering, and his approach to design. I found him a really interesting guy, and I tried to soak it all up. You didn’t realise he was telling you stuff until later on, you came across a problem and you’d think, ‘Ah, Alex Moulton told me about this, didn’t he? He anticipated a lot of problems. We had a lot of common interests, we were both interested in cars and motorcycles and bicycles and design.
Before I got married I used to see him an awful lot him, but then after I had children and you sort of get caught up in all of that. I took my son to see him about three months before he died, and then I went to see him about a month before he died. We had a 90th birthday party for him at Brooks’s Club in St James’s, and we gave him an X-ray photograph of the Mini, which he kept in his dining room.
He was very generous with his ideas and thoughts, and I found him incredibly encouraging. He was passionate and enthusiastic. He came across as an eccentric inventor, but I guess from my childhood, that was somebody I wanted to be. He reinvented the bicycle! Few people have successfully reinvented the bicycle, as he did. They’re beautifully made, and I get such joy out of riding them.

Why have you got so many?
I’ve acquired them over the years, and I love them. I take them on as restoration projects. I felt terribly guilty after buying my last one, but my wife said ‘Darling! Compared to other people’s hobbies, this is a delight!’